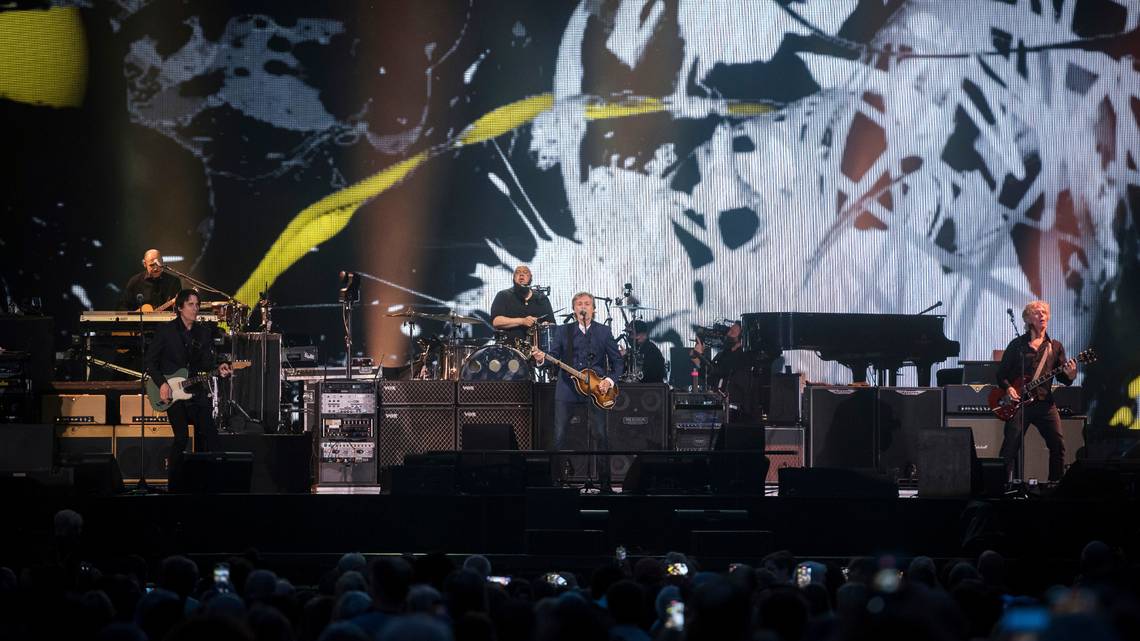 Hard to think of a better way for Paul McCartney to celebrate his 80th birthday than by singing “Glory Days” onstage with Bruce Springsteen or being serenaded by some 60,000 well-wishers. That’s right, the “cute Beatle” turns 80 on Saturday. It’s one of those cultural milestones that bring a sharp intake of breath — has it been THAT long? — along with an appreciation of what he still has to offer. For it has been more than a half-century now since the Beatles broke up, a realization that hits you like that 1970s-era joke about young people saying, “Paul McCartney was in a band before Wings?” Like several other members of the “hope I die before I get old” generation, including Bob Dylan, the Rolling Stones and former Beatles mate Ringo Starr, McCartney keeps working, keeps sharing his music from the stage. Another 1960s icon, Brian Wilson of the Beach Boys, is scheduled to play at the Starlight Theatre in Kansas City on his 80th birthday Monday. “He has a youthful exuberance that is ageless,” said Bob Spitz, a Beatles biographer. “There’s still some of that 21-year-old boy that shines through in all of his performances.”

It would be a cliché — and wrong — to suggest time hasn’t taken a toll. The fragility in his voice was evident while singing “Blackbird” on Thursday night at MetLife Stadium, the final night of a brief U.S. tour. He struggled for the high notes in “Here Today,” his love letter to John Lennon, who was robbed of a long life by an assassin’s bullet. The skill of a sympathetic band, along with the imagination and voices in the audience, patches over the rough spots. “Yeah, yeah, right, I’ve got a birthday coming up,” McCartney said, scanning signs in the audience that reminded him. “I’m not trying to ignore it, but…” The crowd offered a spontaneous “Happy Birthday” serenade, even before Jersey guy Jon Bon Jovi brought out a fistful of balloons during the encore to lead them in another verse. That other Jersey guy, Springsteen, joined McCartney for the duet on “Glory Days” and a version of “I Wanna Be Your Man.” He later popped up to join the guitar duel from “Abbey Road.”

For most artists, the appearance of such local royalty would be a hard-to-top moment. Most artists can’t immediately whip out “Let it Be” and “Hey Jude” to follow it. To mark the birthday, Stereogum magazine asked 80 artists to pick their favorite McCartney song, and the choices were remarkable in their breadth — from the pre-Beatles 1958 cut “In Spite of All the Danger” (which McCartney performed at MetLife) to his 2016 collaboration with Rihanna and Kanye West “FourFiveSeconds” (which he didn’t). David Crosby and Dan Auerbach of the Black Keys both chose “Eleanor Rigby.” Master showman Wayne Coyne of the Flaming Lips picked “Magical Mystery Tour.” Steve Earle selected “Every Night,” while Def Leppard’s Joe Elliott went against type with the gentle “Little Lamb Dragonfly.” Mac DeMarco picked the “Ram” epic, “The Back Seat of My Car.” Many remarked upon the unfairness of having to pick just one. Stereogum’s feature illustrated the varied entry points musicians of different generations have into a living, breathing catalog. For example, it revealed that a largely overlooked album like 1980’s “McCartney II” had a far greater impact on developing artists than its reception at the time would have foreshadowed.

On Friday, McCartney’s team announced that it was packaging “McCartney II” with his other DIY albums, “McCartney” of 1970 and 2020’s “McCartney III,” into a boxed set that will go on sale in August. How vast is the songbook? McCartney performed 38 songs at MetLife, 20 of them Beatles songs, and even managed to miss an entire decade. Remember the 1990s? With the help of Peter Jackson, who reimagined the “Get Back” sessions for last year’s television project, McCartney was able to perform a virtual “duet” with Lennon singing his part of “I’ve Got a Feeling” from the Apple rooftop concert. McCartney also paid tribute to George Harrison, who died in 2001, with a version of “Something” that began with Paul on a ukulele George gave him and built to a full band version. Spitz recalled a Beatles-era film clip of Lennon telling an interviewer that he’d be flabbergasted if it lasted more than 10 years. McCartney stood next to him laughing. Lennon was right about the Beatles as a unit, but not about the music. He couldn’t have imagined that in 2022, one adult standing in line to get into MetLife being overheard asking a companion: “Where are Mom and Dad?”

Advanced birthday be damned, the irrepressibly cheerful McCartney left with a promise when the last firework burst and he walked offstage. “See you next time.” ___ This story corrects year in third to last paragraph to 2022.